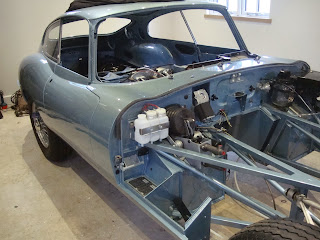 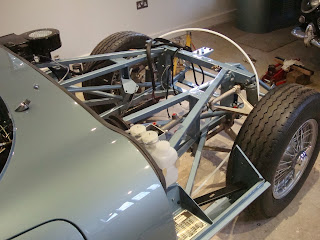 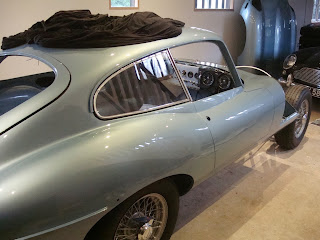 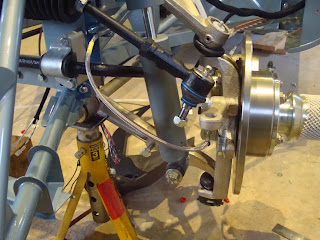 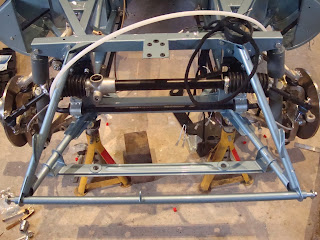 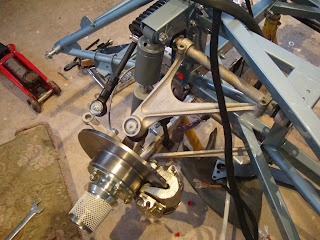 So now all the wiring is complete as is the front suspension.  She has sat back on her four wheels for the first time in 2 years a d the next major job is to rebuild the engine and couple it back to the gearbox. Hoping to do all this in the next four weeks and get it started soon after.  I have booked it in for its trim in late March and I am hoping to be driving 860897 this summer. Can wait.  Still got the job I a, looking forward to least which is fitting the door rubbers and making sure the doors fit as well as before.  Had a few issues with door lock fitting but I hope I have solved that now

The next scheduled job is to fit the front windscreen.  Now as I don't fit windscreens for a living and as the E Type is known to be , how shall we say, challenging to say the least, I am going to cheat and get in a professional to do the job.  I have also now taken off the doors again.  I know, why you ask?  Well because the A post door seal retainers were not fitted when the car was painted and so they have to be riveted on and in any case to fit the seals themselves its going to be easier to do a proper job of it with the doors off.   I should get the seal retainers back from the painters late this week and then can go about fitting them on and then the seals then the doors back on.  If I am lucky I may have the doors built up as well with the next 10 days.
Posted by andrew honychurch at 15:31 No comments:

Posted by andrew honychurch at 11:58 No comments:

At last back from the body shop.

Posted by andrew honychurch at 11:53 No comments: 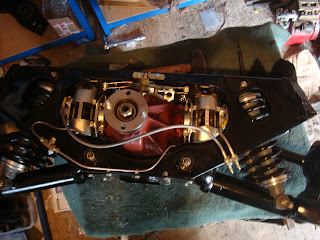 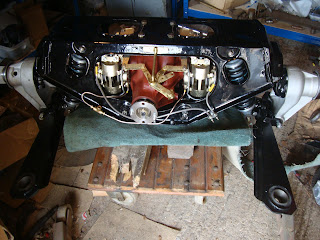 Here are some rather poor photos of the finished IRS.  If I dont ever have to rebuild another of these it will still be too soon.  Seriously, this is a job that in itself is not difficult but would be far easier if you had done them before.  I found that although the book says that the calipers can be fitted once the diff is in the carrier frame, its a lot easier if it was done before.  Also, whilst my paint does look very nice and shiny its a nightmare as there are so many machine fit faces which all have to be clear of paint or else they would not fit home well.   Being an early 3.8 the caliper fixing bolts are safety wired.  Try doing that once the diff is in the carrier.

Then there is the rather unhelpful but true comment made by a friend of mine.   "looks great but what a shame it wont be seen by anyone once its in the car"  Great.  Anyway, on the positive, its done, and it is a major part of the car and will enable me to get the car back on its rear wheels pretty soon after I get the body back from the rebuilders.

Meanwhile I have also fitted up the heater box.   Really pleased with that, only have to make sure it doesnt get chipped before its fitted to the car.

Carbs are fully restored and I will post some photos tomorrow. 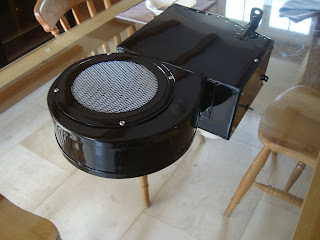 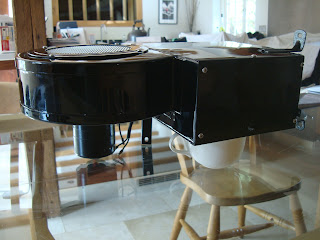 Posted by andrew honychurch at 09:52 2 comments:

Here she is before the sandblast ....more to follow 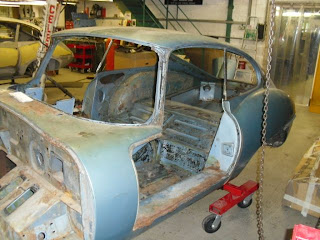 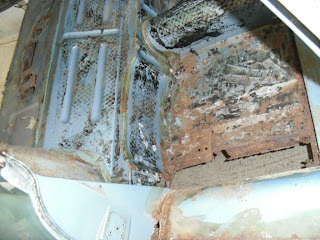 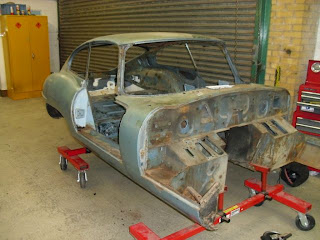 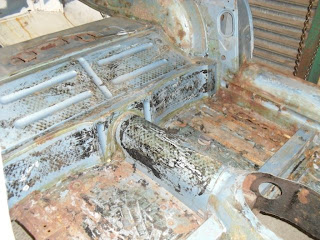 Posted by andrew honychurch at 12:23 No comments:

Email ThisBlogThis!Share to TwitterShare to FacebookShare to Pinterest
OK, we have action at last!!!   I am afraid that the E has had to take a back seat for a number of reasons, but now, I can confirm it is full steam ahead.

The body shell is currently with the rebuilders, a well known company who have rebuilt a lot of important E Types and have all the jigs.  After this it will go to the painters and I should get it back, minus a load of cash, sometime in the early New Year.  Cant wait!.  Back axle is now completed and so is the gearbox.  I am working on all the ancillaries so that I can start building it back as soon as I get the shell back.  Opted for a new bonnet, thank you Jaguar, and new set of engine frames from E Type Fabs.

I am going to try to post some photos either tomorrow or later today.  thanks for watching, things should start to move now!!

Posted by andrew honychurch at 12:16 No comments:

For all of you that have been kind enough to watch this blog, I have been sidetracked on finishing another project which I needed to get out of the workshop.  However, things are about to get going again.  I am picking up the painted parts for the rear axle this weekend and I promise to get some photos up and move the E forward again.  A trip to Goodwood last weekend served as a great motivator, as there were some beautiful series one cars to oggle.
Posted by andrew honychurch at 00:20 No comments: